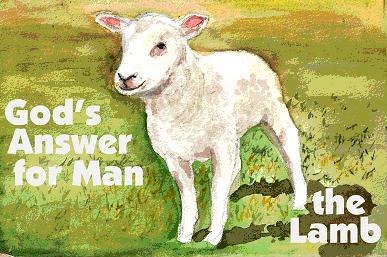 THE BAD NEWS COMES FIRST, BUT THEN THE GOOD NEWS! 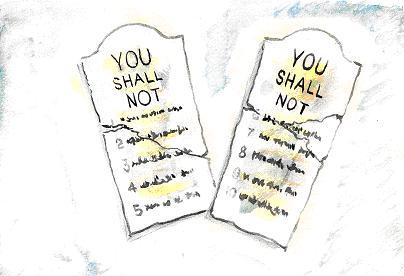 All Mankind’s Problem: Disobedience!
Have you ever told a lie, just a “little” one? The Law, the Ten Commandments, was given to show us that we could not keep them and to show us God’s perfection. Only He can keep His Law perfectly. In Romans 3:19-21 we are told that the Law was given to show that the whole world is guilty before God and that every mouth will be stopped. No one can say or do anything to make oneself right before God. No one can be justified or be made righteous (right before God) by the Law. We have all broken His Law. We are all guilty.
In Galatians 3:21-25 we are told that life and righteousness (being right before God) cannot happen through the Law. The Law was given to bring us to Christ, to point us to a future event that would happen. The Law was given to bring us to Jesus, the Savior from sin. We all broke His Law; we are all guilty sinners and have no hope in ourselves. The Law points us to Jesus. 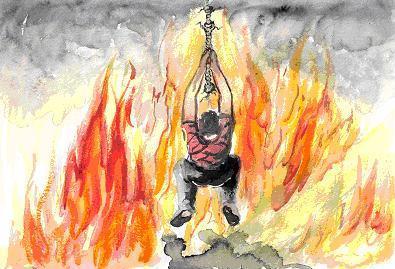 This man is holding a rope with 10 knots tied into it. Each knot represents one of the Ten Commandments. He is trying to get to Heaven in his own strength, in his own way. If only one knot is broken, only one commandment, he is in trouble. He is falling into judgment; separation from God forever in the Lake of Fire. (Revelation 20:10,15).
We have all broken the Ten Commandments; we are all headed for judgment. In James 2:8-10 we are told that if we break one command, we have broken them all. That is the bad news.

The Good News!
The Solution for Mankind’s Disobedience: The Cross of Jesus Christ! 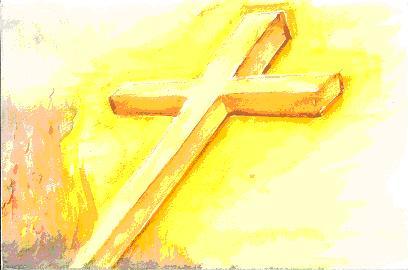 The Good News has to do with the cross and what happened there. What happened at the cross can save us from judgment and bring us to a wonderful relationship with God. Let’s go back to the beginning, back to the Law (the first 5 books of the Bible are also referred to as the Law) to get a foundation of what God was doing for us and what that means for us today.

The Substitute: Be Clothed God’s Way! 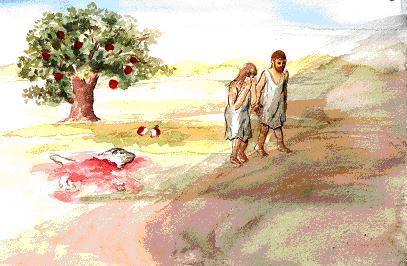 Adam and Eve disobeyed one command. They ate the fruit from the Tree of the Knowledge of Good and Evil, the one tree they were told not to eat from or they would die. They knew they were guilty and hid, they knew something not previously known. They knew they were naked only because they ate fruit from the Tree of Knowledge of Good and Evil. Guilty, they sought to clothe themselves with fig leaves to cover their guilt before God in their own way— just like the man on the rope wanting to go his own way. This is the first time we see an example of man’s religion, of doing things our own way to get to God, to try to make ourselves acceptable before God (Genesis, Chapters 2-3).
They acknowledged their guilt (Genesis Chapter 3). God clothed them His way, in animal skins. We have to come His way. An innocent animal gave its life so Adam and Eve could come to God on His terms. This is the first teaching in God’s Word of the substitute—an innocent animal giving its life so man could be in a relationship with God. This points us toward Jesus.

The Substitute’s Blood Applied: No Judgment! 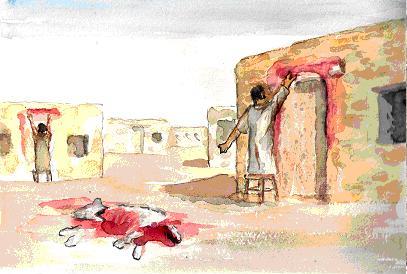 The Israelites were in Egypt for about 400 years. The Lord called Moses to lead His people out of Egypt. The Lord God would bring ten judgments on Egypt. The last judgment would be the death of the first-born in all of Egypt. Pharaoh would then let the Israelites go. As we look at Passover, about 1440 BC, we see again that a substitute, a lamb, gave its life so the first-born in the home where the blood was applied would be saved from judgment. We see this in Exodus Chapter 12. When the blood was applied in obedience, the Lord saw it and passed over that house and judgment wouldn’t come to it. For about 1400 years the Jewish nation has kept the Passover, year after year, to remember that the application of the substitute’s blood saved them from judgment in Egypt. Remember in Galatians 3:24, we are told the Law points us to a future event. That event was the suffering and death of Jesus on the cross (Luke 24:25-27). 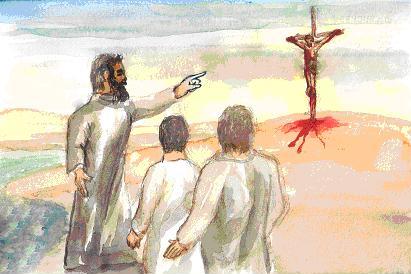 Then, about 1400 years later, John the Baptist was standing by the Jordan River. He saw Jesus walking toward him and said, “Behold, the Lamb of God who takes away the sin of the world” (John 1:29). For a Jewish person to hear that it had to impact them. It should impact us as well. Jesus is the final substitute. When His blood is applied to our lives, we will never be judged (John 5:24). He has taken the punishment that we deserve. Yes, He was our substitute, but only if we ask Him to be, is He our Substitute. We need to call on His Name to be saved from sin, willing to turn from our own ways (hanging onto the rope) and to follow Him as He guides us. When we trust Jesus we are clothed in His righteousness (illustrated by Adam & Eve clothed in animal skins) as stated in Galatians 3:27 and II Corinthians 5:21.
Jesus proved Himself to be the Son of God by the resurrection from the dead 3 days after His death on the cross (Romans 1:4; I Corinthians 15: 3-4).

Whoever calls on the name of the Lord shall be saved-Romans 10:13.
Please respond to God’s call to you. It is not the words you use, it is the sincerity of your heart in calling out to him. This is just a sample prayer. Just call out and ask Him to save you!
Dear God, I have broken Your Law, I have sinned against you. I know I deserve judgment, but I understand that Jesus died on the cross to be my substitute. He took my judgment for me. Thank you. I commit my life to you. I want to turn from my own ways and follow Your ways with Your help. I ask you to forgive me and make me Your child, in Jesus’ name, I ask. Amen.

-Beware of groups who stray from God’s Word, have their own translation and exclude others as if only their group has the truth. God has given us His Word, the Bible. Always check what people are saying by His Word. His Word is the final authority, not man.
-Only be involved in a church (group of believers) who follow God’s Word (there are no perfect churches) and believe that the Father sent the Son to be the Savior of the world and the Holy Spirit was given to unify the church and to teach. Stay away from groups that deny that God is Father, Son and Holy Spirit.
-Most importantly, be a student of God’s Word yourself. Do not rest on what others think. They may be right, they may be wrong. Be a person of the Book and live by His Word. May God richly bless you as you seek to follow Him.
Now that you have trusted Jesus, start growing in Him!
-Talk to Him about everything and listen. That is prayer.
-Read/listen to His Word and obey what He says.
-Spend time with others who love the Lord Jesus Christ. That is called fellowship.
-Tell others about what Jesus has done for you. That is called witnessing.

If you would like a free copy of the Lamb pamphlet, please email Pastor Ted

Dave Spinale from Intervarsity speaks about his college ministry

Pastor Richard Berry speaks about his book "Sheltered by Jesus"